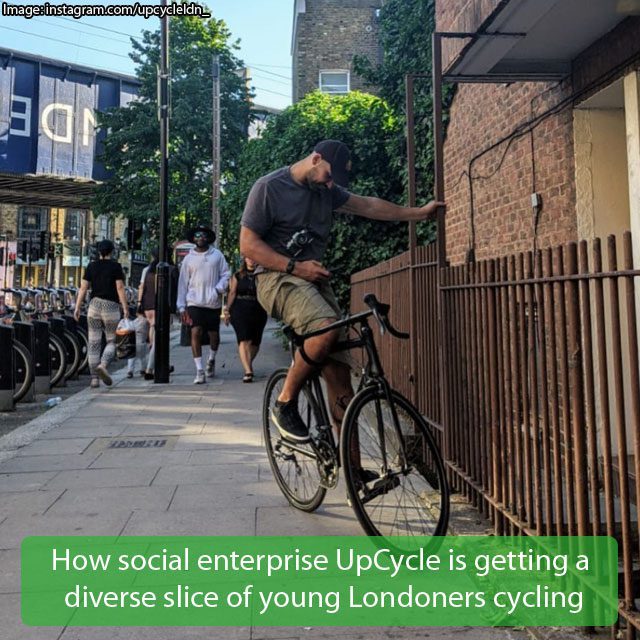 How social enterprise UpCycle is getting a diverse slice of young Londoners cycling.

Having been furloughed, Phil Dobson found himself escaping from inactivity by riding around London on his bike. Within the first months of the full national coronavirus lockdown back in the spring, he also attended the Black Lives Matter protests which were taking place across the world in response to violence and inequality directed against black people.

‘I’d never really been to a protest before,’ explains Dobson when Cyclist caught up with him. ‘I found it very moving and I wanted to do something.’

The result of this desire was the creation of community interest company UpCycle, the aim of which is to get more bikes into the hands of more black and ethnically diverse Londoners.

Safer Transport
Coming into focus at the same time, the Covid-19 crisis and the Black Lives Matter movement have illuminated each other, with the effects of Covid replicating existing health inequalities among Black, Asian and minority ethnic people and leading to higher death rates among these groups.

To cut transmission, early on the Government urged people to avoid public transport whenever possible. This saw bicycle use explode overnight, with shops stripped of stock within days.

However, despite the boom in cycling in the capital, many groups remain under-represented. According to Transport for London, although 41% of London’s population is black or from an ethnic minority, they make up just 15% of the capital’s cyclists.

With people in these groups now at increased risk from Covid-19, Dobson planned to raise £5,000 and refurbish 50 bikes that could be used to help young people from black and ethnically diverse groups avoid public transport, and so keep themselves and their families safer.

‘Seeing how Covid was affecting Black, Asian and minority ethnic people and how they were less likely to own a bike was one of the first reasons behind UpCycle,’ he explains.

To this end, the initial £1,000 he raised went on securing second-hand bicycles and parts, which along with knowledge gleaned from YouTube got the first machines up and running.

Dispatched to youngsters through Carney’s Community Centre in Battersea, to earn the bikes their new owners also had to learn the workshop skills needed to help keep them running.

Ongoing maintenance
Focussed around a boxing gym in South London, Carney’s teaches young people skills and discipline to help them overcome the disadvantages that affect many in the area. It was a model Dobson was keen to replicate as his new project grew.

Having first aimed to simply get bikes to people struggling to access one, the aim of UpCycle soon expanded to building a wider group of knowledgeable cyclists from under-represented groups.

‘It’s not enough to just give someone a bike, they need to be able to look after it, to know how to ride it safely, and to have a community motivating them to carry on with it.’

Looking past the coronavirus, UpCycle aims to build young people’s confidence, using the bike as both a vehicle and an opportunity.

‘It’s about giving kids the bikes so they can get to school and travel around safely, but it’s also about trying to find those that can also be role models,’ says Dobson.

Growing up with the bike
Despite the barrier of cost, convincing kids of the benefits and enjoyment of cycling is easy. It’s keeping them engaged as they grow into adulthood that can prove harder.

To ensure people keep the habit as they grow, Dobson reckons you need to target those around 11 to 15 and give them both the skills and the inspiration to keep cycling.

As Dobson found himself explaining at a conference on getting children riding to school, there was only one black cyclist at this year’s Tour de France.

Similarly, in the UK despite cycling growing in popularity for both sport and transportation, there still aren’t many people of colour within the establishment.

He believes that to keep young black people riding as they grow up they need to have relatable role models, something he hopes UpCycle can provide.

‘When the BCN guys turn up on a group ride, they’ve all got the lycra and the helmet on, but they’ve got nice bikes and they make it look good! I can imagine if I had a group of lads with me, they’d be won over.’

Dobson plans to get older riders to join in and provide a degree of low-key mentoring.

‘The idea is to build a community where we have these maintenance sessions, people come and meet their mates, and everyone is looking forward to going for a ride after,’ says Dobson.

Yet, in London, it can initially be difficult to get young riders to leave their comfort zone and mix with people from different areas.

‘Left to themselves, kids around here will just tend to stay in their own neighbourhood,’ he explains.

Countering this, along with more local trips, next year the plan is to establish an annual Brixton to Brighton ride, giving anyone interested in the sportier side of cycling something to train for. The aim is to build a love of cycling that covers both transport and sport.

The above article by Joseph Delves originally published on cyclist.co.uk in Nov, 2020.