Too Good To Go 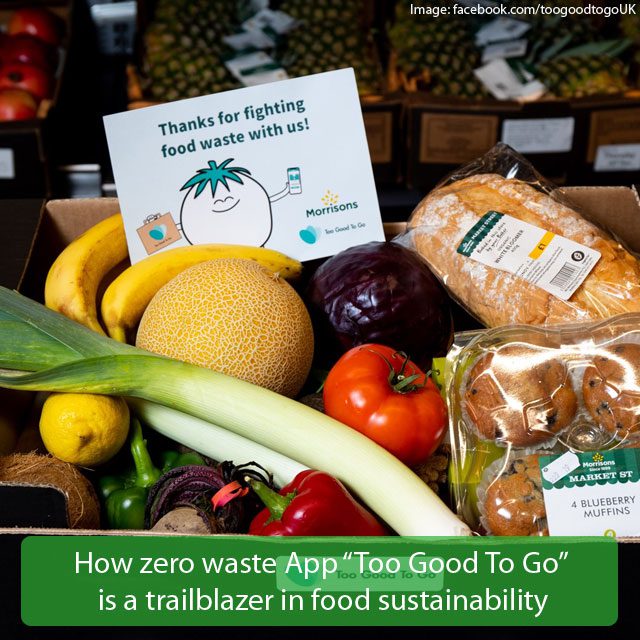 Zero waste App “Too Good To Go” is a trailblazer in food sustainability.

Introducing Too Good To Go, the in-store food pickup service that is clamping down on needless disposal by offering customers the surplus stock left over by eateries at the end of the business day.

A study commissioned by the Food and Agriculture Organisation (FAO) of the United Nations found that one third of all food produced for human consumption is discarded annually, amounting to a total of 1.6 billion tonnes.

The inquiry determined that consumers from industrialised nations generate 222 million tonnes of waste per annum—a figure that is equivalent to the net food output of the entirety of sub-Saharan Africa.

The scale of the loss is unconscionable: at the consumption level it adds up to 100kg per capita in Europe and North America. The FAO estimate that if food waste were a country, it would be the third highest pollutant, contributing to 8% of all greenhouse gas emissions.

One of the adverse by-products of a consumer society is its normalisation of a perfect standard of produce, which results in a disproportionately large mass of avoidable waste. At Too Good To Go, the mission is to intercept the food supply chain and scotch the vast quantities of edibles that are being dumped unnecessarily.

Founded in Denmark in 2015 and developed as a mobile application in Switzerland the following year, Too Good To Go endeavours to curb the environmental hot potato of food waste accumulated by retailers.

After downloading the free app, users are required to enter their postcode, allowing them to browse through an assortment of local food bundles available for collection at discount prices, marked down from their original value at a cost typically ranging between £3 to £6.

Whether it be baked confectionaries, groceries, sandwiches, or desserts, each “Magic Bag” is filled with a raft of unsold provisions that are prepared by the partner establishment and available for purchase shortly before closing time.

Since its launch, Too Good To Go have expanded into fifteen countries across Europe and are affiliated with over 54,000 businesses, from restaurants and patisseries, to convenience stores, hotels, and cafés, including prominent companies such as Starbucks, Aldi, Costa Coffee, and Ikea.

There are currently 26 million active users of the app who have collectively saved a staggering 46.5 million meals. Food waste is increasingly being recognised as a critical world issue, but though resource misuse may be creeping up the global political agenda, the challenge that lies ahead cannot be overstated.

The Boston Consulting Group (BCG) predict that in the span of a decade the volume of food wasted will rise by a third, mounting up to 2.1 billion tonnes, unless consumers and corporations make a concerted effort to undo this disquieting trend.

Sustainable Development Goal 12, promulgated at the 2015 United Nations General Assembly, urges for firms to reduce their ecological footprint by dissociating economic expansion from degradation of the natural world. It advances the framework of “life cycle thinking”, which is an approach to becoming alert to the environmental repercussions of business practices and consumer choices.

Another key point for consideration in the fight against food waste is the ambiguity surrounding expiration dates, which are responsible for 10 per cent of the 88 million tonnes of foodstuffs disposed in Europe at each stage of the value chain.

The primary source of confusion arises from food package labels, which may feature any variety of terms including “use by”, “best before”, “sell by”, and “display until”, when in practice it is only the former two criteria of which the shopper must be made aware.

It is crucial for the public to note the distinction between the “use by” date, set as a deadline for fresh, chilled, and perishable commodities, after which the goods present health risks if consumed, and the “best before” date, which specifies the window of time an article of food will maintain its optimum quality.

The critical difference is that the latter is an approximation made by the manufacturer based upon the timeframe when the comestible is at its peak, but it is not, as is often mistakenly believed, an indicator of its safety to eat.

In February 2019, Too Good To Go introduced to Danish supermarkets a new initiative advising industry leaders in the food and drink sector to append to their labels an “often good after” date to encourage buyers to use their own discretion to determine whether the food is fit to be eaten.

A coalition of multinationals, including Unilever, Carlsberg, and Arla Foods have adopted the scheme to clarify to customers that the timespan during which products are edible is longer than what is commonly assumed, due to the undefined and misleading cut-off points associated with an item’s shelf life.

Too Good To Go recommend that we refer to organoleptic properties, such as the texture, consistency, and colour of food to assess whether it has spoiled, as opposed to throwing it out immediately after it has passed its “best before” date.

According to the UN, a mere quarter of the food that is dissipated every year is sufficient to sustain the 870 million people worldwide who face food insecurity.

The problem of food waste is systemic in nature and requires the cooperation of stakeholders at each stage of the food system, including production, processing, distribution, consumption, and refuse management.

The ingenuity of Too Good To Go lies in its appeal as a ‘win-win’ solution for all players: overcome are the sunk costs that companies incur when the unpredictability of footfall means that there is overstock remaining after hours.

Most importantly, however, is that greater efficiency of the food outlet’s daily operations will slash its waste footprint. The vision of a circular economy promoted by Too Good To Go is based on the principle of designing out waste and enhancing resource productivity.

Curtailing food waste is one of the foremost ways in which global warming can be reversed. To ensure the sustenance of future generations, it is vital for us to be mindful of the long-term implications of our consumer behaviours.

To discover more about Too Good To Go and join the growing community of “Waste Warriors”, please visit their website.

The above article by Zayna Dar first published on goodnewsshared.com in Oct, 2020.

This site uses Akismet to reduce spam. Learn how your comment data is processed.