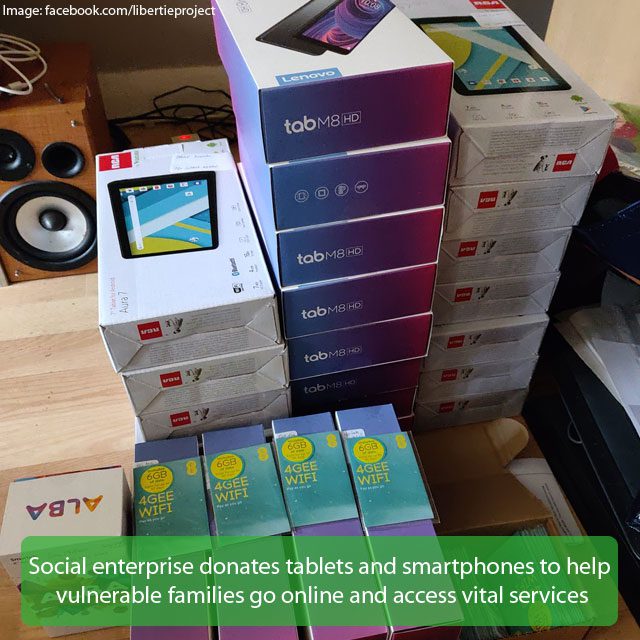 HUNDREDS of vulnerable Highlanders are to be given web connections and devices to help them access vital services and stay connected.

Some 230 smartphones, tablet computers and Chromebooks have been donated to families in remote parts of Scotland – helping more than 500 people.

And they have also been handed a combined 17,250 GB of data to help get communities online.

The technology was handed out by the not-for-profit social enterprise The Libertie Project.

It is thought that about 500 children, families and elderly people in an area of the Highlands bounded by Fort William, Thurso, Nairn and Ullapool will be helped by the move.

The devices – including 30 smartphones, 40 Chromebooks, 85 MiFi tablets and 75 WiFi tablets – and data were targeted at a range of people, including older people who have been left socially isolated due to Covid-19.

Other beneficiaries included domestic abuse victims who were provided with secret phones, and children who otherwise could not access online school resources.

Another 100 devices will be distributed to vulnerable people between now and Christmas.

The Libertie Project handed out the devices after being matched with digital transformation consultancy Level 5 by the National Business Response Network.

Since the start of the Covid-19 pandemic, the National Business Response Network has made 2093 matches between local community groups, schools and charities and UK businesses that have been able to meet their urgent needs during the crisis.

We are working on another batch of #digital devices that will help households all over the #Highlands stay connected during #lockdown. Working with @SCVO, @firstportscotland and @national_emergencies_trust_ #NeverMoreNeeded #NETcoronavirusappeal #stayconnected

Liberty Bligh, CEO of The Libertie Project, said: “Digital exclusion is a massive problem for Scotland’s most vulnerable communities, and Covid-19 has highlighted how isolating a lack of internet connection is.

“So much of life takes place online these days that an internet connection is really a human connection – and in many cases it’s the only contact that some people have.

“Across Scotland, thousands of children, families and elderly people are being excluded from modern life.

“We were delighted to help these people to get online, and would like to thank The National Business Response Network for helping make it possible.”

Gaurav Malhotra, Director of Level 5, said: “The last few months have been hard for many people, especially those who are cut off from human contact and cannot get online.

“My team jumped at the chance to help The Libertie Project to bring invaluable connections to the people who needed them.

“It’s up to the wider community to make a difference in difficult times, and I urge all businesses to do what they can to assist those who need it.

The above article by Philip Murray first published on northern-times.co.uk in Sep, 2020.