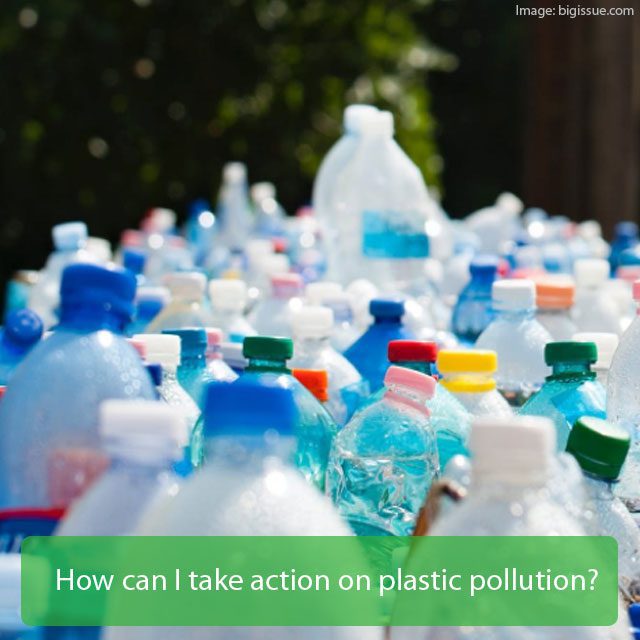 How can I take action on plastic pollution?

It’s difficult to avoid plastic in everyday life, but there are some steps you can take to reduce your role in plastic pollution.

Plastic pollution is one of the biggest obstacles to overcome in the fight to take care of the planet. The cheap, long-lasting material is a huge part of our everyday lives, but its durability makes it a danger to the environment and wildlife.

Have a look around. Chances are high that there will be numerous pieces of plastic in your line of sight at any given time. Some of it will last for years, some of it will be used once and then go straight in the bin. All of it will eventually end up in landfill, the ocean or burned.

It doesn’t just cause pollution, but poses a major threat to the climate. More than 99 per cent of plastics are made using fossil fuels, according to the Centre for International Environmental Law, and could result in 1.34 billion tonnes of greenhouse gas emissions by 2030.

That’s why recycling it is so important – to drive down the amount of new plastic being manufactured – as well as to clean up our land and oceans. Individual recycling habits won’t reverse the climate crisis alone, but it’s an important step.

What exactly is plastic pollution?

The accelerating demand for single-use plastic has overwhelmed our ability to deal with it. Half of all plastics ever made have been manufactured since 2004, according to scientists in the US. That means there are bits of plastic not just sitting in landfills but littered across beaches, clogging rivers, and choking the seas.

It puts wildlife at risk, with animals both on land and in the ocean faced with ingesting, suffocating on or becoming entangled in plastic debris, and accumulating in wildlife food chains.

An extra 66,000 tonnes of plastic waste would be created, if everyone in the UK used a single-use mask each day for a year. Wearing a mask is a vital tool to reduce the spread of the virus. But we cannot allow this pandemic to stop our progress in the fight against plastic waste. pic.twitter.com/h2zYNeq9jF

How much plastic pollution is there?

Around eight million pieces of plastic enter the world’s oceans each day, Surfers Against Sewage said. That amounts to 12 million tonnes per year. That’s the equivalent of one million double-decker buses.

Up to 80 per cent of all marine debris – solid materials manufactured or processed by humans which is directly or indirectly disposed of in the ocean – is plastic, the International Union for Conservation of Nature said.

Microplastics pose a risk to health around the world. They are pieces of plastic which have broken off larger pieces, gradually becoming smaller and smaller until they are less than five millimetres long. This also includes tiny plastic fibres from clothes and microbeads – think the tiny, abrasive pieces of plastic in your face wash – which can pass through water filtration systems to oceans and rivers.

They can enter the human body through dust in the air, from bottled water and from certain foods, particularly seafood. A person could consume more than 100,000 microplastic particles each year, according to researchers in the US.

If our bodies don’t get rid of these tiny plastic fragments, they could become lodged in our bodies or enter our bloodstreams and release chemicals which can cause inflammation.

How much plastic is recycled?

Plastic recycling has increased dramatically in the last two decades. British Plastics Foundation research showed around 13,000 tonnes of plastic bottles were recycled in the UK in 2000, compared to 380,000 tonnes in 2020.

Around 32 per cent of all plastic is recycled in the UK, the researchers said.

What plastic can be recycled?

Other types, like window fittings, car parts and plastic cutlery, can be recycled but it is much more difficult to do so.

Margarine tubs, microwave meal trays, empty bleach bottles and soap dispensers can be recycled too, though it’s important to remove the pump first from the latter.

The on-pack recycling label, used by most retailers and brands, means recycling information can usually be found on a product.

We hope for a day when recycled materials are so universally used, so that waste managing problems are turned into solutions. Right now what we need is consumer demand for better plastic choices.

Find out about the actions you can take right now: https://t.co/NI6RhPEqYH pic.twitter.com/GPBpQVJtPJ

What plastic can’t be recycled?

Every type of plastic can technically be recycled, but a mix of logistical and economic factors mean some effectively cannot be.

Many types of food packaging can’t be easily recycled. That includes bread packaging, crisp packets, salad bags, pet food pouches and the plastic wrap fruit is often sold in. This is because they are made using layers, to store food in airtight conditions, making them very difficult to break down in the recycling process.

However Tesco recently announced a new scheme for recycling harder to process plastics like bread packaging, crisp packets and pet food pouches, starting with collection points at 171 stores across the south west of England and in Wales.

It is very difficult to recycle gift wrap made from plastic, takeaway boxes, coffee cups and plastic used for guttering.

How can I recycle plastic?

Recycling plastic means use of the material becomes much more sustainable (though most types can only be recycled once), reduces the environmental impact of plastic and stops masses of plastic being sent to landfills.

The easiest way to recycle plastic is to make good use of the bin for plastics most councils provide for households to collect as they do other waste,. Always make sure you follow your local authority’s guidelines on what products they will and won’t accept for recycling. Also make sure all products are cleaned enough to be free from food or liquid – a quick rinse will usually be fine.

Squashing them, like flattening water bottles, before storing them in your recycling bin saves space and makes them easier to transport. You can leave the lid on.

Shops in the UK must now charge for plastic bags, encouraging you to buy reusable ones. When the 5p charge was introduced in 2015, plastic bag usage dropped by 80 per cent across the country.

But if you end up with single-use plastic bags, you can return them to most big supermarkets which often have points for recycling them. Most councils won’t accept them for recycling but they can be posted to specialist recycling plants which deal with trickier plastics including shopping bags and cling film.

This interactive tool from Recycle Now allows you to find information on recycling most products you’ll find around your home.

What else can I do to cut down my plastic usage?

The best way to fight plastic is to avoid buying it in the first place.

That could mean investing in a reusable water bottle, avoid single-use coffee cups, swapping plastic straws for metal ones, using toothbrushes made from bamboo rather than plastic and opting for sustainable food wraps, like types made from beeswax. Loose products, like fruit and vegetables, can be bought without using the small plastic bags provided in shops. Toiletry products which come in plastic bottles such as shampoo and soap can often be replaced using solid bars.

And while ‘bags for life’ sold by supermarkets are better for the environment than single-use bags, they are still made from plastic and will eventually end up in landfill, so it’s better to use a shopping bag made from more sustainable or durable materials.

The above article by Hannah Westwater first published on bigissue.com in Mar, 2021.