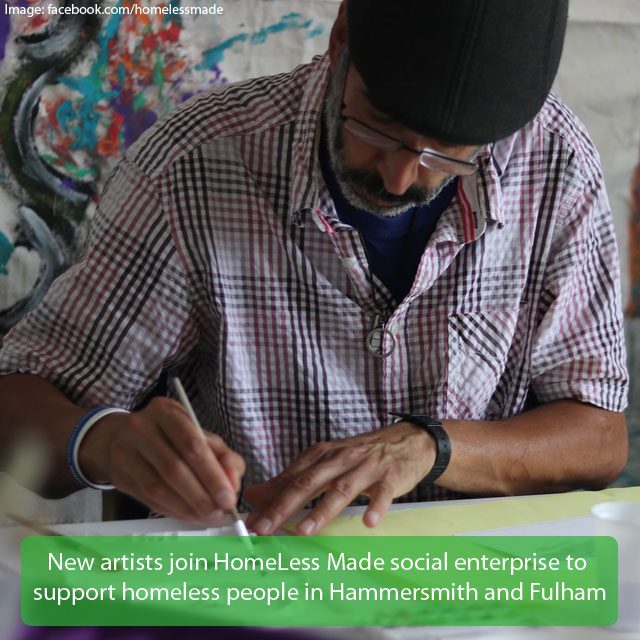 The artists have created new work which features on a new range of colourful greeting cards and t-shirts, with profits from sales split 50/50 between the artist and the charity.

HomeLess Made has been selling the art of Lui Saatchi and Guan Chow as beautiful greetings cards since the first UK lockdown. The cards now sell at market stalls, on the HomeLess Made website, and at Petit Miracles shop in Shepherds Bush, in London, and in Bush Theatre.

Now Lui and Guan have been joined by Mary Vallely, Michael Crosswaite, John Sheehy, and Dave Martin. The collective work with a range of different styles and media, and are provided with materials and a quiet, safe space to work once a week at the project.

Each artist has been affected by homelessness or lives with a mental health condition. They use their talents to generate an income for themselves – and to raise money for Barons Court Project, to support others who are going through difficult times.

To celebrate the launch of the new artists, the team decided to branch out with a new product range – including brand new cards and t-shirts.

Abstract collage artist, Dave Martin, sells The Big Issue outside Tesco in Shepherds Bush and was excited to see his artwork as a t-shirt. He said: “Imagine I’m on my pitch and someone goes past wearing my art on a t-shirt. I’ll be like – Art by Dave Martin. That’s me. That will be so good.”

As well as providing a huge boost to their self-esteem, being a member of the collective provides an opportunity for the artists to stand on their own two feet financially. All profits are split 50/50 between the artist and the charity.