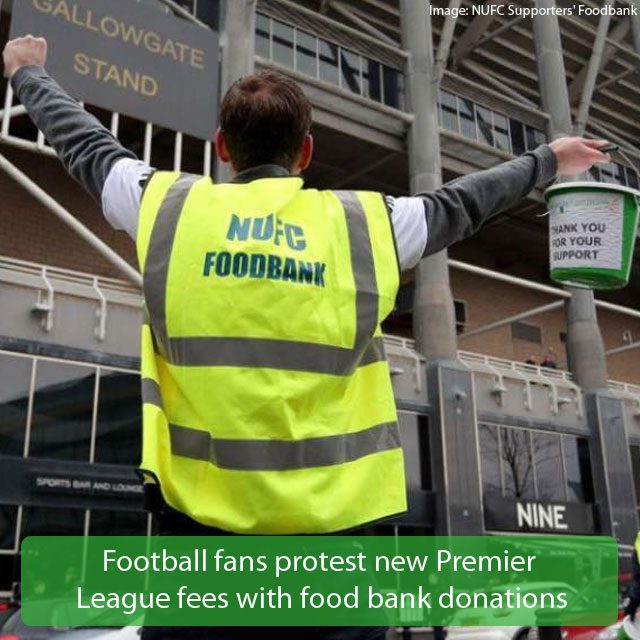 Supporters are being asked to use the £15 they would spend on watching their team to help vulnerable fans and hit back against ‘extortionate’ plans.

Fed-up football fans have donated thousands of pounds to food banks in protest at “brazen” new charges introduced by the Premier League.

The NUFC Fans Food Bank asked Newcastle United supporters to donate to a food bank instead of paying a new £14.95 pay-per-view fee to watch games on Sky Sports or BT Sport, charged on top of the TV subscription costs and, for some fans, the money already paid for season tickets.

The grassroots supporters’ group has raised almost £2,500 in a matter of days through the #CharityNotPPV campaign and are urging supporters of other Premier League clubs to do the same.

Stuart Latimer from NUFC Fans Food Bank, who credits the idea to Newcastle fan account Toon Polls, told The Big Issue: “On principle, I am against pay-per-view. It’s just extortionate to ask people to part with more money.

“Newcastle fans are just disgusted because of the amount you pay for Sky and BT and season tickets when you can’t go to the match and then you are being asked to pay again. I think out of the goodness of their hearts they are devoting their cash to the food bank rather than Sky and the Premier League.

“We’re trying to make a positive out of it and get the money away from the fat cats and towards the people who really need it.”

The Premier League plans mark a change from recent months, as matches played behind closed doors due to the coronavirus pandemic were televised at no extra cost.

Latimer insists that the idea to help food banks instead has now spread with other fans food bank groups for West Ham and Merseyside’s Fans Supporting Foodbanks, another Big Issue Changemaker, also getting involved.

MCFC Fans Foodbank Support back the plan too. Manchester City supporter Nick Clarke told The Big Issue that the announcement over the weekend has left fans feeling taken for granted. And the campaign to divert funds towards the rising number of people needing help to stave off starvation is a positive way to protest.

“Everyone’s massively behind it,” said Clarke. “It’s not just an angry protest being tweeted out but it’s a tangible thing you can do by refusing to pay your pay-per-view and putting into a food bank. I’ve seen people cancelling their Sky and BT subscriptions. It lets people vote with their pockets.

“This year, in general, I think football clubs have shown their greed and fans are feeling very disillusioned and very disaffected.

“The pay-per-view plans are a brazen money grab by huge institutions which do not need any more money. It’s really striking a nerve with fans.”

The growing fans foodbank movement and Marcus Rashford’s ongoing battle to make sure all children get fed has intertwined football with food poverty campaigning in recent months.

But the Covid-19 pandemic’s impact on professional support has meant match-day collections for food banks have been impossible without supporters attending games.

NUFC Fans Food Bank collections make up to a quarter of the annual intake for the country’s biggest food bank, Newcastle West End, said Latimer. The Manchester City counterparts kicked off operations on January 1 this year, collecting 1.25 tonnes of food at City matches.

Clarke said: “The food bank we supply, Manchester Central, has had a three times increase in demand when compared to last year and that’s hitting all sectors of society. I think people really do see what is important at the moment.

“Not being able to collect at matches was terrifying. The food bank had told us that we were very quickly becoming their biggest regular donor.”

The above article by Liam Geraghty first published on bigissue.com in Oct, 2020.