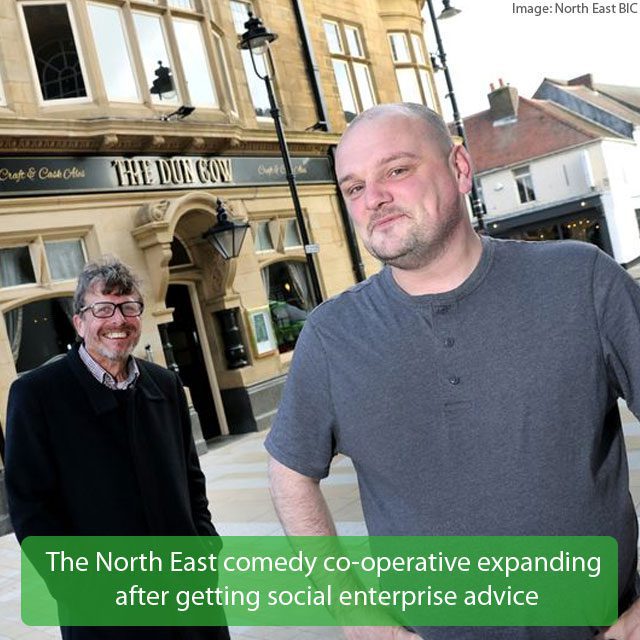 Felt Nowt are starting a regular comedy club in Sunderland as part of their mission to reach new areas.

A North East artistic cooperative has set up a second comedy club in the region after getting support to develop its business model.

Felt Nowt – which takes its name from a catchphrase of cult North East comedian Wavis O’Shave – is a not-for-profit organisation set up by a group of comedians in the region who want to bring comedy to new areas.

They have worked with social enterprise experts at the North East Business and Innovation Centre (BIC) to develop a business model that reinvests profits with the long-term aim of making comedy more accessible to different parts of the region.

Have opened a comedy night at Laurel’s in Whitley Bay, the group will soon launch a weekly event at Sunderland’s Dun Cow pub.

Comedian and Felt Nowt member Si Beckwith said: “Sunderland has been without a permanent home for comedy for too long. It’s unbelievable that a city of this size and comedic heritage doesn’t have a comedy club already and we can’t wait to share the talent that’s on the doorstep.

“The city is buzzing with regeneration and is ripe for a new comedy scene that acts not just as a platform for comics, but also for other creatives, writers, producers and communicators.”

The Felt Nowt co-operative was started in the pandemic, when a group of out-of-work performers came together to consider ways they could create new opportunities.

Though their initial plan was to simply generate some income after the closure of venues where they worked, they soon realised that their combined skills and experience could help create something bigger. They have worked with social enterprise experts Kevin Marquis and Michelle Booth, from the BIC, on business planning and attracting funding.

Mr Beckwith said: “What we’ve ended up with is something much more impactful. We all volunteer our time to drive Felt Nowt forward, and it’s all been about generating work for the talented comedians in the North East.

“Comedy has the potential to do incredible things in all kinds of contexts to improve confidence, mental health and relationships. Our driving force is to bring those benefits to our community.

“Kevin and Michelle really got that and helped us stay true to those goals. Their support meant we felt like we weren’t flying alone.”

Kevin Marquis, the BIC’s social enterprise manager, said: “Felt Nowt are a fantastic example of an ambitious organisation with a social heart. By coming together in this way, they not only amplify what they do as individuals but can reach whole new audiences and benefit new communities.

“We’ve seen a huge uplift in recent months in the number of businesses wanting to set up in a way that supports them to do good in the world and the BIC continues to invest in services to support them to do this.”

The above article by Graeme Whitfield first published on business-live.co.uk in Nov, 2021.