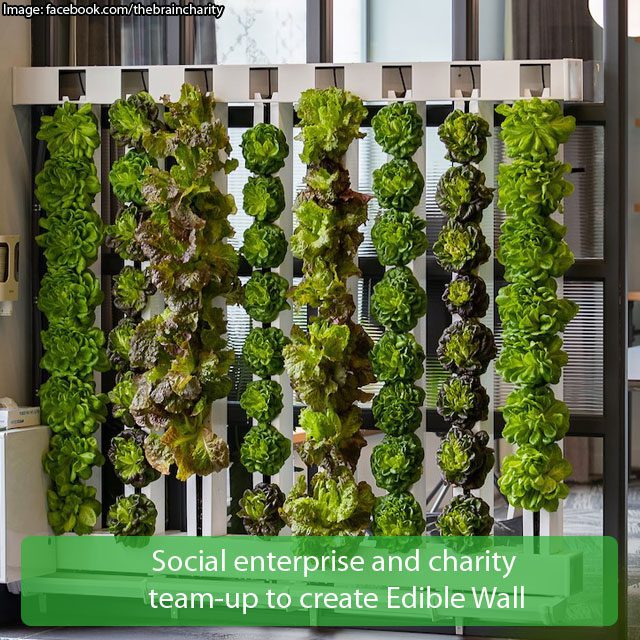 The Brain Charity has launched a £15,000 appeal to become the first charity in the UK to have its own edible wall.

What is what is it?
The charity has teamed up with Baltic Triangle social enterprise Farm Urban to teach hundreds of people with neurological conditions how to grow healthy, sustainable food using hydroponics, a vertical, soilless and pesticide-free method of farming.

The two organisations want to install and maintain the 2m by 1.8m wall next year to provide clear mental health and environmental benefits. It will also sustain free, healthy food for The Brain Food Café, the charity’s on-site restaurant.

How to get involved
On November 10th they launched a Crowdfunder appeal to raise the cash to deliver initial workshops, create an Edible Wall educational programme and install and maintain the living wall at The Brain Charity’s HQ on Norton Street in Liverpool city centre.

Tui Benjamin, head of communications and fundraising at The Brain Charity, said: “The impact of a neurological diagnosis can be devastating.

“Life can become very lonely and frightening – meaning physical and mental health suffer and malnutrition can be common.

“Many of our service users live on or below the poverty line, with 31% saying they have barely enough money to live on despite receiving welfare benefits. Social isolation is also a huge issue, with more than half telling us they regularly feel lonely.”

“We therefore hope this pioneering project, the first of its kind in the UK, will not only allow us to significantly improve the mental health of some of our most vulnerable service users – after all, taking care of plants is a known mood booster – but help them make more healthy food choices, learn new skills, make friends and do their bit for the planet too.

“The Edible Wall is an incredible opportunity to empower our service users – a community so often marginalised – to know they can contribute to a better, healthier future; for themselves and for the planet.”

Liverpools first edible wall
Farm Urban created Liverpool’s first vertical farm in 2019 and over the past five years have been educating schools, businesses and communities across Merseyside on the benefits.

They have already installed one of their eight-tower living walls in the Bruntwood offices in Liverpool’s Cotton Exchange building.

Hydroponics uses energy-efficient LED lights and circulating water to grow leafy greens and herbs all year round, whatever the weather.

The futuristic indoor farming technique was recently featured in Netflix documentary David Attenborough: A Life On Our Planet as a key component of the battle against climate change.

Dr Paul Myers, managing director of Farm Urban, said: “Farm Urban uses aquaponics as a focal point around which communities can come together.

“The food we eat also has a huge effect on our health and wellbeing – we seek to help people understand the importance of eating well by providing the fresh food that makes that possible in a way that doesn’t harm the planet.

“Partnering with The Brain Charity will allow us the opportunity to share our food revolution with a wider audience than ever before.

“The Brain Charity pilot will be used to develop an educational programme around accessible, indoor food growing which will be shared with communities across the UK and beyond.

“We hope this will lay the groundwork for bringing an innovative approach to urban farming to groups all over the world.”

Donate
As part of the Aviva Community Fund, next Monday [Nov 16] the crowdfunder will open to Aviva employees, who are given £250,000 in total each quarter to distribute to projects as they see fit.

Members of the public can also make donations in exchange for rewards, such as Brain Charity merchandise, Farm Urban ‘Greens For Good’ boxes of leafy greens and herbs and ‘pay it forward’ donated meals.

To find out more or make a donation click here …

The above article by Russell Gannon first published on baltictriangle.co.uk in Nov, 2020.