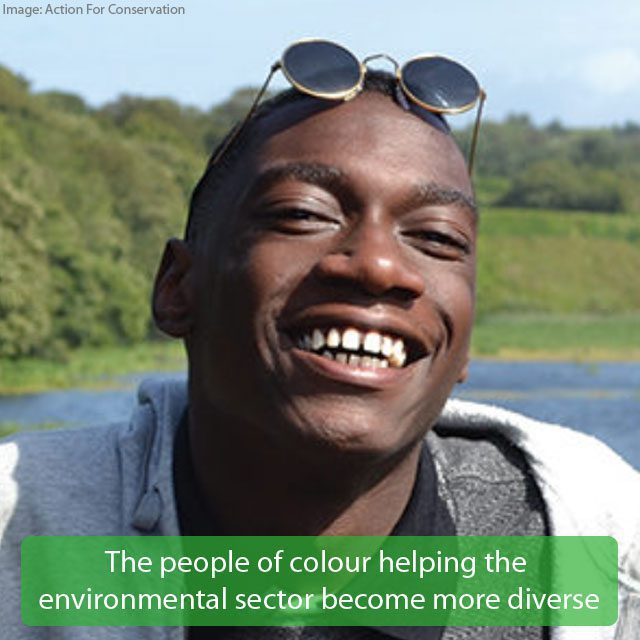 The environmental sector ranks the second-worst for diversity in the UK. These conservation workers are changing that.

The environmental sector ranks the second-worst for diversity in the UK.

Just 3.1 per cent of workers are from minority backgrounds, according to a 2017 study from think tank Policy Exchange, with only farming faring worse at 1.4 per cent.

Just 0.6 per cent of environment professionals are people of colour. That’s a big problem, AFC head of programmes Laura Kravac explains, with “climate change impacting people from ethnic minority backgrounds and in the global south disproportionately”.

AFC is one of 30 environmental partner charities to launch Race for Nature’s Recovery, a scheme deploying the government’s Kickstart scheme – six-month placements for people aged 16-24 – to address racial inequity in the sector.

I’m British-Nigerian, and when I was nine I went to live with my grandparents in Port Harcourt – which used to be the garden city of Nigeria but now is all concrete and unfinished buildings. So my Nana Judy was always incredibly focused on having a semi-wild garden.

There were overgrown trees, plantain and shaddock trees, bushes of red hibiscus and orange birds of paradise flowers and white lilies. That made me really value the environment and conserving nature.

The power of industry role models is so overlooked. There definitely is a stereotype.

Just look at any environmental charity’s board of trustees and it’s quite obvious – we’re trying to fight against that stereotype.

Race for Nature’s Recovery is aiming for around 100 kickstarters encouraging a diversity of cultural backgrounds. The urgency is there.

Building a greener world starts at home. If everyone’s doing something at a local level, like my Nana Judy, then collectively that’s something happening globally.

And it avoids that thing when old environmental charities historically would go to another country and be like, “Here’s how we do it,” which is so disrespectful to communities who thrive without our intervention.

That locality is so important: it starts with the little plant on your windowsill.

Youth trustee at Action for Conservation and student

Growing up in a low-income family among Bristol concrete, I never had a relationship with nature. It’s hard to engage with an issue when you lack that connection. But aged 14, AFC’s week-long environmental camp in Pembrokeshire was a spiritual experience.

I was a youth ambassador for AFC and have just joined the board as a youth trustee, which has equal voting rights. It’s amazing to see what AFC is doing.

It’s ironic that some people of colour think being green is for white people. Indigenous communities have been green and sustainable for centuries.

Climate change impacts us all, especially people in poverty around the world. But we’re forgotten by politicians and forced to live with the stench of car fumes. You can feel powerless.

It’s sad that I don’t see enough people in the environmental world who relate to me. You need to fight off impostor syndrome. We need Black and brown trailblazers to diversify the voices.

Last year’s Black Lives Matter protests were a wakeup call for society – it’s such a shame that it took thousands of lives to be lost, that it took trauma to spark action. In everything I do I’m motivated by helping the global south

Before I went to an environmental camp when I was 14, growing up in South-East London I hadn’t really been to the countryside before.

Being in nature – doing activities like bat walks, seeing sheep for the first time not on a farm – I had a moment of epiphany where I was sort of like, wow, this experience of tranquility is something I want long term.

I joined the Natural History Museum as a youth panel facilitator on its urban nature project, to address the lack of people of colour’s access to green spaces in London.

Every fortnight we had meetings with 12 young people from diverse racial backgrounds who talked about their experiences, and delivered a presentation to the deputy mayor of London on expanding access to green spaces.

Environmental issues are social issues. People of colour and people from low-income backgrounds tend not to be able to experience holidays in the countryside as much. I just want everyone to experience that moment of epiphany in nature. After uni, I’m joining the conservation sector to help spread that opportunity

I work on the Great North Wood project, restoring and upkeeping a series of small woodlands – a rich history running through the veins of urban South London. We remove invasive flora like rhododendrons and create corridors between different woodlands so animals like bats can expand their range.

Growing up I was obsessed with animals. I sometimes met surprise and disbelief saying I studied animal behaviour and wildlife conservation – there are myths Black people aren’t interested in conservation, but it’s because there are so many barriers excluding us.

When I got my first job I realised how underrepresented we are. Representation is everything. If I’d seen a Black woman on TV, like Attenborough, it would have shown me that I was welcome in that space too.

When I appeared on the BBC’s Springwatch in May, talking about London’s secret woodlands, I got an insane response. So many messages from Black women, like, “I have a daughter and it was amazing to see another Black woman on television for her to look up to.”

I was almost in tears! The scales are not tipped in our favour, that’s why it’s so rewarding to work in urban conservation – improving the green spaces for local communities.

The above article by Jem Bartholomew first published on bigissue.com in Oct, 2021.