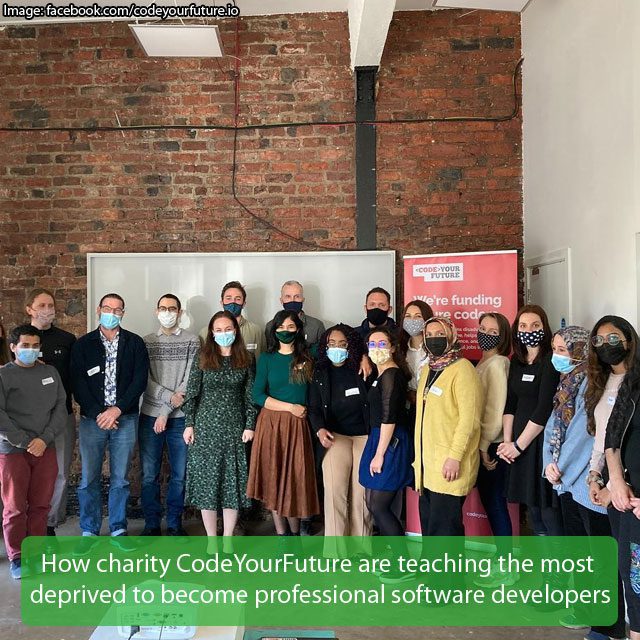 Teaching the most deprived how to become professional software developers.

Meet the charity that looks to bridge the gap between the tech industry and the nation’s most vulnerable.

A charity that teaches refugees and disadvantaged people how to code has been awarded funding as part of the Scottish government’s drive to create a world-class tech industry.

With the unemployment rate of refugees standing at 18 per cent in the UK combined with the nation’s ever-growing poverty statistics, currently at 15m people, CodeYourFuture looks to alleviate the socio-economic barriers preventing the most deprived from gaining employment in the technology sector.

Almost all – 96 per cent – of those beginning in the programme have next to no experience but 70 per cent of graduates have gone on to find employment or full time study. One of those is Mohammed Dwina.

Dwina came to the UK as a refugee from Sudan in 2015 and described his initial integration experience as difficult but said it’s great to see how far he has come since.

Dwina told The Big Issue: “This country was completely different from where I came from, everything from finding work, culture, language, people and of course the weather, all of these things made it extremely challenging in the beginning.”

Dwina was approached by a CodeYourFuture mentor whilst studying a part-time ESOL course at college.

“It was different from a college, it was more practical based with less focus on theory, and they really helped a lot when it came to softer skills as well such as improving my communication and confidence. The whole organisation really felt like a community.”

Programme manager Gianluca Palombo told The Big Issue that the software development training offers a “life-changing” route towards an industry that has significantly less barriers than others.

“Most coding bootcamps are inaccessible for the majority of people, who cannot afford to commit several thousands of pounds and 16 weeks of full-time study.

“Meanwhile, college courses in the UK remain inaccessible for the same reasons or simply inadequate in their level of training relative to what is required to secure someone a job in the industry.”

The funding will go towards training the next cohort of trainees and will allow for further support to be provided to the community of people within the charity’s sphere.

Palombo added: “Thanks to the funding, we can launch careers in tech for even more people who are underserved in Scottish society”.

The charity operates remotely and will provide laptops and software to help those eligible get started, dismantling any digital divide that may prevent those interested from getting involved.

The non-profit organisation has recently celebrated its fifth anniversary and over the next few years it seeks to further establish their presence throughout their current operations in Glasgow, London, North West England and the West Midlands; and in Cape Town, South Africa.

The above article by Paul McTaggart first published on bigissue.com in Nov, 2021.