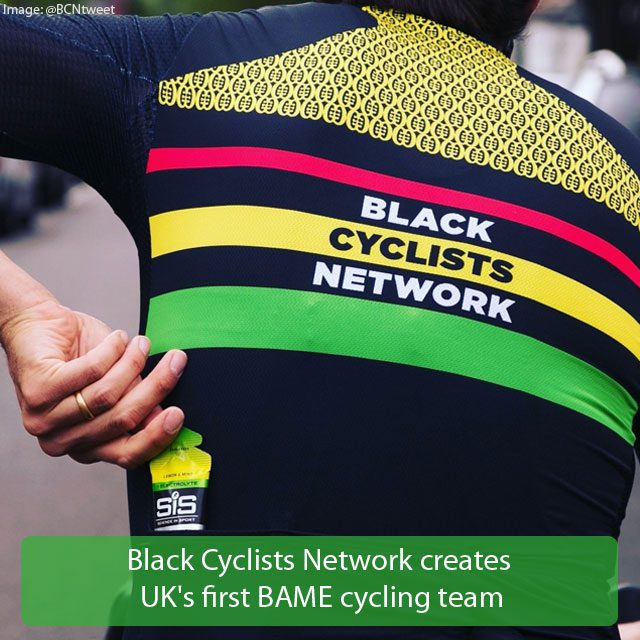 New squad aims to give opportunities to cyclists from black, Asian and minority ethnic backgrounds.

The Black Cyclists’ Network has announced the formation of the first competitive cycling team in the UK for black, Asian, ethnic minority (BAME) athletes.

The new team will aim to form a domestic team of 10 riders to race across the UK in 2021, formed of elite, cat 2 and cat 3 riders. Currently, the team’s roster consists of nine riders.

The team is being formed by London-based cycling club The Black Cyclists’ Network which was created in 2018 to tackle the stark lack of diversity and representation across the sport.

The new team, founded by original club founder Mani Arthur, is part of plans to increase the visibility of cycling to BAME athletes and help provide access to the sport.

‘BCN is more than a club. We are a community built to address the lack of representation in the cycling world. There are a lot of cyclists from Black, Asian and Minority Ethnic (BAME) backgrounds in the UK and around the world yet very few resources cater for our communities,‘ explained Arthur.

‘With the launch of the BCN team, we aim to give much-needed visibility to people of colour in the sport to inspire and engage a new audience to the physical, mental and social benefits of cycling.’

Alongside the formation of the team, the BCN has established a GoFundMe page with the aim of raising £10,000. The purpose being to help fund the team with race expenses and equipment but also establish community outreach programmes.

The page can be found online here …

In 2019, Arthur was subject to a ‘degrading’ stop and search when a police officer searched his after claiming that he smelt of cannabis.

Arthur, who was in full lycra at the time, was with two fellow cyclists near Euston train station when the police officer stopped him and asked to conduct a search.

Arthur later described the incident, which was caught on camera, as a ‘degrading and humiliating experience’ after nothing was found.

The above article by Joe Robinson first published on cyclist.co.uk in Jun, 2020.

This site uses Akismet to reduce spam. Learn how your comment data is processed.