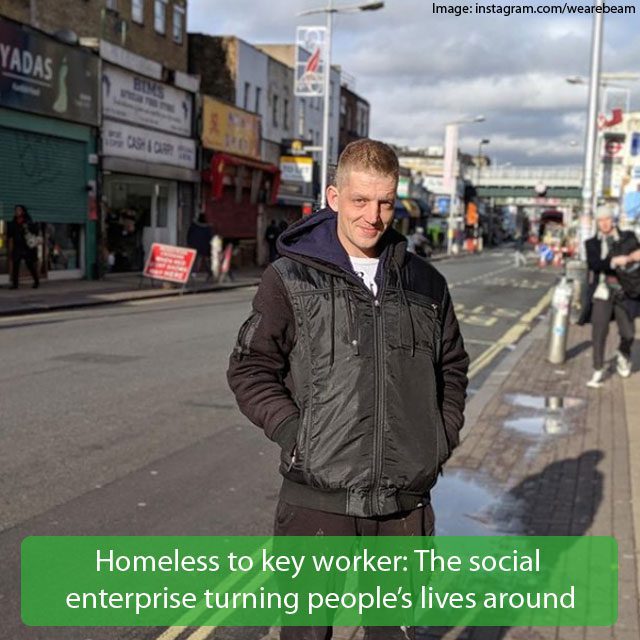 “My daughter looks up to me a lot and I feel like I’m doing her proud. She’s a massive daddy’s girl and told all of her friends: ‘My Daddy is working on Christmas day!’”

Key workers have been praised as the heroes of the pandemic, working in healthcare, education, transport, food and other industries which keep the country running while most of us are asked to stay at home.

Now, thanks to a crowdfunding campaign, almost 100 vulnerable people at risk of homelessness are in critical key worker roles since the first national lockdown.

Social enterprise Beam launched the “Fund a Future” campaign last summer to get homeless people into key worker positions. Since March 2020, the company said it had helped 122 people gain employment, with 88 of these working in crucial industries.

“It’s inspiring to see so many homeless people taking on important roles during the pandemic,” Beam’s founder Alex Stephany told the Big Issue.

“Many of the people we’ve supported have been hit hard by Covid-19 so it’s amazing to bring them hope and stability during these difficult times.”

According to the Office for National Statistics, 10.6 million people, or 33 per cent of the total workforce, were key workers in 2019.

Vulnerable individuals are referred to the service by homelessness charities. After checking to ensure the person is ready to enter full-time employment, caseworkers build a career plan for the individual and ask for donations.

Strangers donate toward the cost of skills and training to help the person into the world of work and those who give receive regular updates on how their money is used.

Gaz Fitzgerald, based in South East London, has been working with Beam since 2019. He said he found himself sleeping on friends’ sofas to avoid being out on the street after a relationship breakdown. Beam helped him find private rented accommodation in May and by Christmas, after raising £6,050 and completing his training, he was a full-time railway engineer.

“I’m now in a financial situation where I can support myself and build my own savings. I feel so lucky to be in work, and having a stable income has meant I can support my local community,” Gaz said.

“My daughter looks up to me a lot and I feel like I’m doing her proud.

“She’s a massive daddy’s girl and told all of her friends: ‘My Daddy is working on Christmas day!’.

“I know she’s proud of me being a key worker, and that gives me a real boost. It feels good to wake up every day knowing I’m doing something that benefits the general public and keeps the country moving.”

Beam has also worked with people who are now supporting the health service as key workers during this critical time.

Jolantyte Ivanova was referred to Beam by Hammersmith and Fulham Council after living homeless with two children. She had been sofa surfing and staying in hotels while looking for permanent accommodation and raised £2,893 to become an NHS healthcare assistant in West London.

“I’m excited now to have the opportunity to build my career and to be a good example for my kids,” she said.

“I hope they can look at what I’ve overcome and see that they’re able to do whatever they put their minds to.”

Stephany said that after the campaign’s success, Beam is hoping to carry on supporting those in vulnerable housing and plug the gaps in the Covid-19 shattered economy.

“We want to change attitudes towards people with lived experience of homelessness in the UK, by showing just how important a contribution they can make to society.”

The above article by Josh Sandiford first published on bigissue.com in Jan, 2021.